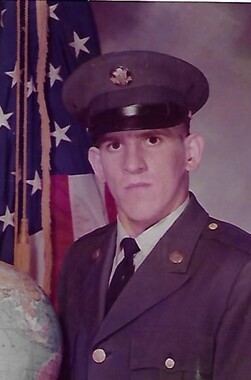 Back to Thomas's story

Thomas Eddie Richards, age 64, of Prosperity, WV, passed away at Beckley Appalachian Regional Hospital on Saturday, January 18, 2020.
Born on May 6, 1955, in Ohio, he was the son of the late Thomas Jefferson Richards and Elsie Francis Smith Richards.
Mr. Richards was retired from US Army and Army National Guard with 27 years of service. He was of the Assembly of God faith, and enjoyed camping, fishing, football, and was an avid West Virginia University Mountaineer Football Fan and Marshall University Fan.
Those survivors left to cherish his memory include his loving wife, Judy McAlpine Richards; his children, Thomas Michael Richards of Alabama, and Benjamin Andrew Richards of Moorehead, KY; a step son, David Linkous and wife Karin of Manassas, Virginia; a brother, Allan Richards and wife Rita of Gastonia, NC. Several grandchildren also survive. Also surviving Mr. Richards are his three best friends, Arnold Ford, Tracy Winders, and Craig Thomas.
A service for Eddie Richards will be held at Rose and Quesenberry Peace Chapel in Beckley, WV, on Thursday, January 23, 2020, at noon with Rev. Donald Adkins officiating. Burial will follow at Blue Ridge Memorial Gardens Mausoleum. Friends may visit with the family one hour prior to the services at the funeral home. Military rites will be provided by the US Army National Guard from Kingwood, WV.
Private online condolences and other expressions of sympathy may be directed to the family via our guestbook at www.roseandquesenberry.net.
Arrangements by Rose and Quesenberry Funeral Home, 1901 South Kanawha Street, Beckley, WV.
Published on January 20, 2020
To plant a tree in memory of Thomas Eddie Richards, please visit Tribute Store.

Plant a tree in memory
of Thomas